Matteo Bocelli Performs "Love Of My Life" By Queen

Matteo Bocelli is a 23-year-old singer from Italy who is known to many mainly thanks to his father, the renowned Italian opera singer Andrea Bocelli.

Months ago, he posted a wonderful video online in which he performed one of the hits of the music group Queen.

Matteo diligently follows in his father's footsteps, and has recorded several duets with him in the past. Months ago, he posted a wonderful singing performance on his YouTube channel, in which he tackled the Queen's hit song. 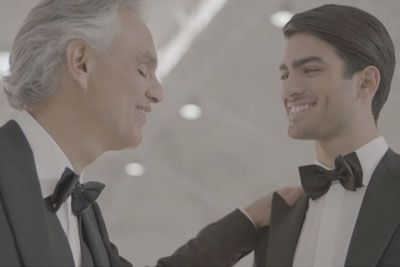 
While playing the piano, he sang their song "Love Of My Life," which the Queens introduced to the world in 1975. With the performance, he took on many music lovers online.

Listen to how Matteo Bocelli, the son of Italian opera singer Andrea Bocelli, presented his singing talent to the world while performing the hit of the Queens.
Tweet StumbleUpon
Current article has no comments yet.
Will you be the chosen one who will comment first? 😆
Top videos of the week
Subscribe to free Klipland newsletter and get top videos of the week on your email.

Aircraft Seconds Away From Crashing After Entering Cloud

Woodworker Combines Bamboo Sticks And Resin Into A Beautiful Bowl

'Tears In Heaven' Performance From Guitar Quartet Is A Masterpiece

Husky Tastes The Lime For The First Time, Makes Everyone Laugh With Reaction

Allie Sherlock Sings "I Will Survive" On The Street Of Dublin

Dad Overcome With Emotion When Surprised With Husky Puppy

Fisherman Defies Gravity While Jumping On Board Boat

5000-Year-Old Neolithic Tomb On The Island Of Orkney, Scotland

African Singers Will Give You Goosebumps With Their Performance

Man Makes A Rainbow Night Lamp Out Of Resin And Wood

Man Catches Shrimps To Remove Parasite Off Them