In early January, a special video was uploaded on Facebook from the Faroe Islands, located in the North Atlantic, between Scotland in the south and Iceland in the northwest.

Helen Waag filmed a scene near Gásadalur that took many people's breath away!

There have been a number of thunderstorms in the Faroe Islands in recent weeks, bringing a very strong winds with it. So strong that water was splashed all over the waterfalls. 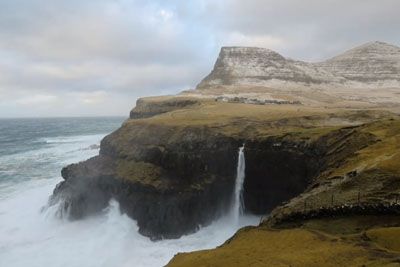 Wind Lifts The Water From Waterfall On Faroe Islands


Near the area of the Múlafossur waterfall, Helen Waag filmed a scene where Mother Nature showed off its artwork. Next to a steep cliff, a huge water thrombus appeared, which impressed many online users with its image.

Take a look at the extraordinary nature scene Helen Waag filmed in the Faroe Islands. Have you ever seen a water thrombus so close?