The internet these days is surrounded by a video in which one of the grandmothers made a big mistake. She accidentally ate marijuana cookies baked by her grandson.

He captured the grandmother's reaction on camera, and to date, the video has garnered 2.3 million views on the Facebook network.

The grandma ate some biscuits containing a narcotic substance, and the nagging grandson recorded her reaction on camera a few hours later.

The drug hit her a few hours after the ingestion, and the grandson recorded moments when the grandmother began to behave strange. She was also having problems with a glass of drink ...

See what the result was when a grandmother accidentally ate some of her grandson's marijuana cookies. How would you react in her place?
Son of a biscuit!
Our website has detected this video doesn't work. The staff is doing everything to make it work again.
Watch similar videos 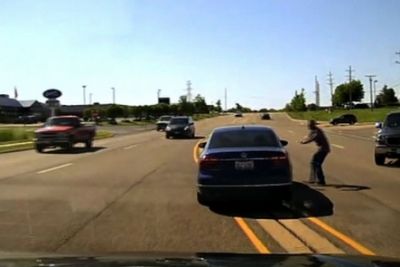 Man Jumps Into Moving Car, Saves Driver During A Seizure

Lady Gives Lesson To An Armed Robber Inside A Shop
Tweet StumbleUpon
Current article has no comments yet.
Will you be the chosen one who will comment first? 😆
Top videos of the week
Subscribe to free Klipland newsletter and get top videos of the week on your email.