Three vegan activists from Spain have shocked the public these days with their unusual actions.

They are convinced that the roosters intentionally rape the hens, so they are firmly determined that the animals need to be separated from each other! 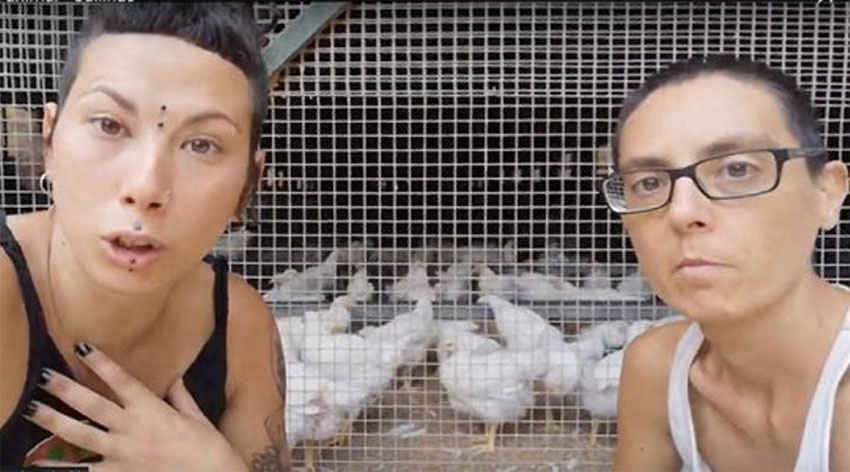 Almas Veganas
Vegan activists from Almas Veganas say we must not differentiate between human and animal species - which is why they believe animals can also be raped.

Activists say they plan to end the abuse and rape of chickens who are constantly running away from the roosters.

"Roosters intentionally rape chickens and don't think it's an animal instinct," activists say, and they will do everything in their power to prevent such acts. For the start, they suggest seperating the hens from the roosters.
Tweet StumbleUpon
Top comment
Tami Wright
Where to begin: I raise chickens. The hens do this thing called the "submissive squat", the roo does his thing, it takes about 3 seconds (there's a joke in there, I'm sure), and it is entirely instinct. Additionally, if these "activists" really believe we are supposed to treat the chickens as equal to humans, then why are the chickens in that cage? Dummies.
0
Dan Tralton
Put them on a desert island with the chickens. they'll soon find the facts of life. They'll have eggs to ear but As they eat the chickens and there are no offspring, they'll starve.
2
Matt Menzies
The activists do not represent all vegans. Just as many non vegans are different and have many different views on anything. Please try keep a level head when reading these articles and commenting negative options about all vegans. Plenty of dumb and smart people in all walks of life. Just do the best you can and enjoy life. MM
0
Robin Vaughan-Evans
Have heard that a of lionesses are being raped in Africa could you go and sort those lions out.
-2
David Matthews
I’m sure all vegans aren’t this stupid but hey, you have to wonder.
-1
Kevan Millar
Why would anybody want to make the crap they spout public, All the shit going on there worried about a chicken getting raped! You couldn’t make it up!
0
John Cardoni
Brawndo !!!!...it's got electrolytes! It's what chickens want and crave.
0
Chris Aldridge
I mean, if the chickens belong to them, it's their own business, but the logic is dumb. How does a chicken let you know they are consensual or aren't? I don't even know if such a thing occurs to a chicken. It's kinda just what they do, they mate. The hens probably just think of it as another day. Roosters don't even have a penis. There is no penetration. There is simply sperm exchange. Most species don't have sex for pleasure. Humans are one of the only ones who does. So sex between chickens probably isn't about any kind of satisfaction or dominance. It's probably just instinct and procreation.
0
Bob Farber
The fact that people can’t recognize insanity any longer is what’s unusual.
0
Drew Brenneman
What was in the water they were drinking? Must have been tainted. There certainly IS NO LOGIC IN THEIR REASONING.
0
Dallis Miller
Strange looking creatures aren't they? The dude and dudette I mean.
0
Carlos Rodrigues
Why do those guys look so mad in the picture?
1
Carol Williams
What a trip of morons.... Just when I think I have heard everything, something always comes up to make me rethink just dumb some people can be...
0
Thomas Grøn Ek
Jahahahahahahhaaa
1
Paul Normand
So they’re “assuming” the hens are getting raped now? Do they know what the hen is thinking or are they just forcing their agenda into another species? To me that would sound like lifestyle rape!
0
Yuri Dumass
I don't seem to see them out to prevent the bees from assisting in the rape of the flowers they visit by depositing another flowers pollen without their consent.
0
Steven Weaver
i think the problem isnt the raping roosters its some people's fear of not allowing them to be free range in a free range environment the chickens can say no .
1
Armand Hammer
By the looks of them I think they’ve eaten too many nuts and fruits as they are nuts and look like fruits to me except for that bantam rooster queering in from the side. Buck, buck, buck, buck, buck cock
1
Mag Num
Incredible....these two are dumb clucks
0
Amanda Brewster
James Someone needs to put you back in the dog cage you came from and put a muzzle on that face of yours. Sexist scumbag!

As for the chicken thing it’s completely stupid!
1
Tim Ingvaldson
Do these women speak chicken? Otherwise how would they know if the lady chickens consented to a little cock.
1
Debbie Phillips
Jacquie Jones You are correct. You don't need a rooster for the hen to produce eggs. Although you do need a rooster for the eggs to be fertilized. If roosters are removed from the hens there will be no more chickens.
2
Jeff Smith
The young man on the right looks a lot like a chicken.
1
Dan Soukeroff
Reply to Jim S. the idiots are looking back in the Mirror! The first sentence and the fifth word that starts wit the letter S tells us they are from Spain!
1
Robert Aldridge
isn't that David Hogg the florida whiner on the right ???
0
Matt Buswell
Well if they have their way, there will be a short decade and then KFC, Nando’s, chikafill and god knows who else, will have to work the work word turkey into there names. Well until the turkeys go extinct for raping lady turkeys.
0
June Bacon
Definitely lala
-2
Jacquie Jones
Doug Hammond. You do know you dont need roosters for hens to produce eggs. Dont you?
-2
Doug Hammond
How is egg production going with them separated???
3
Jeffery Estrada
STUPID aid as Stupid does!!!!
Dumb and Dumber!
-1
Jim Sanderson
are we even sure what the video was about? it was in Russian, and I didnt see one chicken in the whole video? Might help if the idioots who run this site at leats put english subtitles on it the subtitle were in Russian (or some other language ) too.
2
Helen Wyland-Malchow
SO sorry for them, not the chickens. They seem to be limited .....in many ways......
-2
Dylan Dagenais
Ahaha stupid dikes ,you depend on us straight people to make more gay baby’s. you guys should quite farming while your ahead ,you’ll fail miserably.
12
Tami Wright
Where to begin: I raise chickens. The hens do this thing called the "submissive squat", the roo does his thing, it takes about 3 seconds (there's a joke in there, I'm sure), and it is entirely instinct. Additionally, if these "activists" really believe we are supposed to treat the chickens as equal to humans, then why are the chickens in that cage? Dummies.
5
Eric Nix
These people are complete idiots.
-2
Sylvia Classic
I love how all the men commenting are super gross (and probably rapists).
-9
James Vawter
This is why women should be in the kitchen without an opinion unless that opinion has been given to them by a man.... It's been repeatedly proven liberals feminists vegans and whatever else they want to call themselves today can't be allowed out in public without somebody holding their leash or they'll make regular women look stupid and at this point I think they're trying to do it on purpose
-1
Christopher Pope
Right.... They just like grabbing other people's cocks.
10
Jared Malan
LMFAO Lets wait and see what comes first, consensual chicken sex or the species dying off.
10
Phil Acre
Veganism = mental illness
8
Daniel Spillett
she looks like she has not eaten in months skinny pale and mentally ill that's a typical vegan
Top videos of the week
Subscribe to free Klipland newsletter and get top videos of the week on your email.

Two Sisters Sing Moving Duet 'In The Arms Of An Angel'

Cat Licks His Foot, But It Always Kicks Him Back