Years ago, a video went viral on the Internet, where we can watch a horrible act in one of the markets in China.

There, the saleswoman sold live turtles, fish and frogs in vacuum-sealed plastic bags, and the "product" serves as a keychain.

The bags containing the live animals are barely 3x5 centimeters (1x2 inch) in size, and passers-by can buy the products for $1.50. The scene was filmed by one of the visitors on the street in Beijing, and according to the media, the trapped animals only live in the bags for a few days. 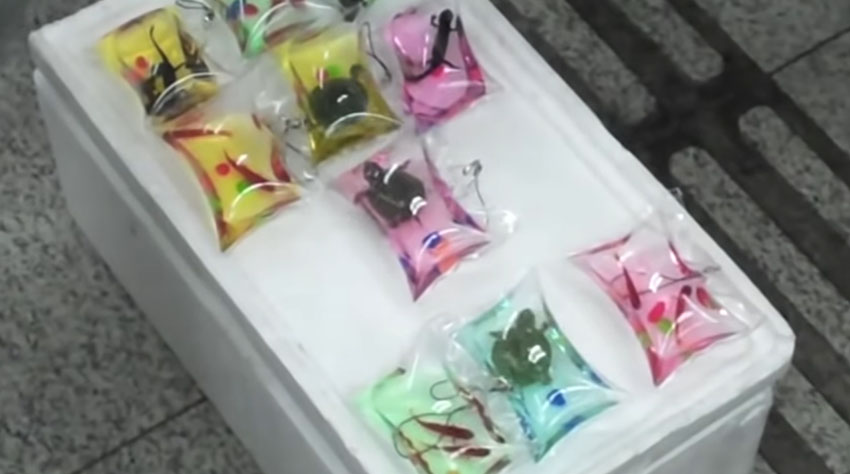 Paula Ramón, YouTube
The media reported on such a sale as early as 2011, and many animal rights activists have been trying for many years to ban this practice worldwide. The bags contain a colored liquid that contains nutrients and oxygen, which runs out after a few days.

After buying such keychains, most often the animals in the bags die, while at best keep some buyers free the animals later and keep them as pets. Look at the terrifying scene that was filmed years ago on one of the streets in Beijing.
Tweet StumbleUpon
Current article has no comments yet.
Will you be the chosen one who will comment first? 😆
Top videos of the week
Subscribe to free Klipland newsletter and get top videos of the week on your email.

76-Year-Old Nun Yanks Ladder Away From A Thief

Man Performs Pirates Of The Caribbean Theme Song On A Piano

Adorable Dog Is Obsessed With His New Baby Brother

Hairdresser Shaves Off Own Hair In Solidarity With A Cancer Patient

The Dogs Backed A Mountain Lion Up To The Cliff

Dog Hilariously Trust-Falls Onto Her Owner

Dachshunds Drag Bed To Sunny Area To Get Warm

Baby Exploded In Her Diaper, Parents Almost Puked Due To Mess

MrBeast Pays For 1,000 Surgeries For Blind People To See For The First Time

Brake Checking Driver Gets A Karma

Truck Driver Helps Police In A Car Chase On The Highway

Otter Mum Prepares Cubs For Life On Their Own